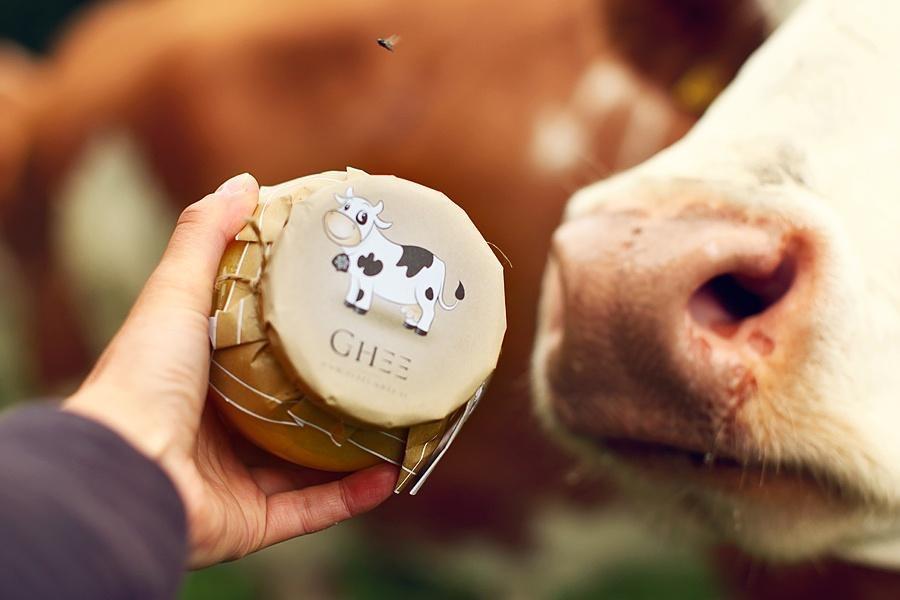 ‘Man is a creature of nature and genuine cooked butter its essence.’

Careful and slow cooking (uninterrupted, 48-hour-long cooking over fire), together with raw material of free grazing cows, which all winter long live in accordance with Eco/Bio higher standards, result in the quality of Golden Ghee that we produce. The fullness of this essence, as Ghee can be called, is unique. It revitalizes, and due to its smell and taste, places you into the category of a ‘healthy gourmet and alchemist’. In addition, expert opinions of Ayurvedic connoisseurs and medical doctors teach that it is highly recommendable and suitable for developing bodies, as well as a preventive.

Fungi that cause candida are not in favour of the caprylic acid which Ghee contains. It is widely known that once the fungi in our system over-reproduce, weight loss is almost impossible. Candida causes fatigue, lack of concentration, recurring fungal infections, sinusitis, etc. The side effect that renders it impossible to lose weight is the constant want for sweets and carbon hydrates. This happens because fungi feed on sugar (carbon hydrates disintegrate into sugar in the digestive system) and stir in us the wish for food with which they could feed.

Find out why Ghee was dubbed ‘king’s therapy’, care and part of higher classes’ diet by flipping through the sites and links on our next page.

Ghee (gi) also affects voice. Experts therefore recommended and prescribed it to those who use their voice for public purposes, for it is known to make the voice softer, more flexible and melodious.

Ghee is among the first on the scale of the most used and wholesome fats. It is in sync with human physical biology, physiognomy, human energy and thus naturally close to our being. It literally blends with the human being and does not contain trans-fatty acids nor raise cholesterol levels.

Written in ancient books and records, and nowadays widely known in some circlesis that Ghee:

-     as manufacturers we have, unfortunately, been obligated to cut out 50% of its characteristics due to law that entered into force on 14th January 2012 and which

prohibits advertising and open writing about natural medicinal characteristics of food and such unless the effects are scientifically proven. Food business operators can thus, when tagging and advertising food and supplements, use only those scientific claims (222 defined) that are based on credible scientific evidence and were included in the list of permitted claims which were (or are yet to be) confirmed by the European Food Safety Authority (EFSA). ‘That is, however, only the first step toward care for health.’ This year, Codex Alimentarius, which will demote mostly manufacturers and salesmen of natural medicines, came into force.

Characteristics and benefits of Ghee; find out why it was called king’s therapy, care and food, why has Ayurvedic medicine been praising it for millennia, why people used it to anoint themselves from head to toe, why is it the most universal oil on the planet, culinary gold and much more…