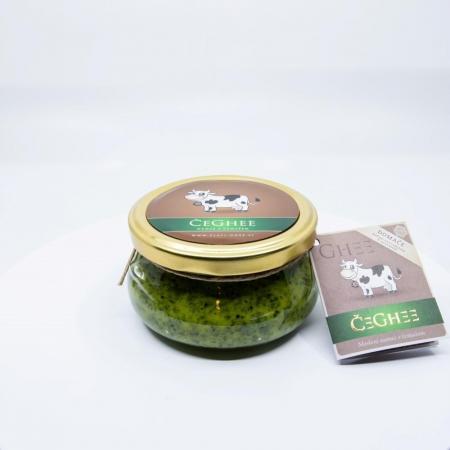 Thank you! Here is your coupon code to use at checkout:

CeGhee is a spread prepared with Golden Ghee and wild garlic leaves. Its fresh taste of nature restores your vital energy. ChemGhee is enriched with Himalayan salt and Piran Salt Flower, and a pinch of delicious mustard seeds roasted on Ghee butter.

ČeGhee is an ECO/BIO spread made from Golden Ghee and ramsons. Enriched with Himalayan and Piran salt, as well as with a pinch of delicious ghee-roasted mustard seeds, its fresh taste of nature rouses vitality. Mustard use dates back to the Egyptian times and the Greeks, due to its multilateral use, once even believed that it was a gift to mankind from the god of medicine, Asclepius.

The ČeGhee spread thus comprises a marvellous taste, combining a handful of quality information. Ghee, which is considered culinary gold and is classified among the best of oils, is an excellent combination when mixed with ramsons. Golden Ghee is made by cooking the delicious butter unremittingly for 48 hours, thus refiningand turning it into the most universal and imperishable oil. Due to its practicality and universal applicability it has been extolled in Ayurvedic medicinefor millennia. For many it represents the pillar of quality cuisine. Golden Gheen combines the essence of nature; refined and bound with bear leek, together with mustard seeds creates a taste that tells and brings harmony.

Ghee /gi/ sharpens and creates taste, increases absorption and efficiency of flowers, herbs and fruits that are mixed. When combinedwith ramsons, a unique and extremely effective blend is created.

ČeGhee spread is tasty, easy to spread and made from natural ingredients without preservatives. It can be consumed independently, with a slice of bread or as an excellent addition to sandwiches, salads, sauces, pasta and other dishes that cry for a more natural taste.

"Sustaining the heart of nature"

There are yet no reviews for this product.